The Oakland Wine Festival presents the 2017 results for the Judgment of Oakland.TM This annual report shares the detailed outcomes one of the first such event that invites consumers to double-blind taste exceptional wines from around the world, side-by-side with winemaking legends and wine industry leaders. Double-blind tasting is a rare experience or invitation offered to only select professionals worldwide for centuries.

“It is wonderful that Melody Fuller, Founder and President, Oakland Wine Festival, is involving more consumers in the wine judging process.” Dr. Liz Thach, MW, Distinguished Professor of Wine and a Professor of Management at Sonoma State University.

Judgment of Oakland TM
This year’s event featured 121wines. Over 200 winemakers, vintners, winery owners, sommeliers, trade, media and wine aficionados and novices double-blind tasted and privately cast close to 3,000 votes of a 1, 2 or 3 on the wines.

The 2011, Quixote, Helmet of Mambrino, Petite Sirah from the Napa Valley took the top honor for the 2017 Best of Show Judgment of Oakland TM.

Keep reading to learn who the other winning wines are for the represented vintages, varietals, appellations and more!

The wines, presented in plush black velvet bags, range in price from the quite affordable to the very expensive, thus representing a broad range of varietals, vintages and winemaking styles.

The wines tasted and voted on covered an expansive landscape and a wide variety of appellations.
Napa Valley vintners presented an amazing depth of fine wines. Sonoma County had a spectacular showing of wines. Exciting wines from France, New Zealand, and Brazil amazed, confused and teased many of our vintners, winery owners, sommeliers, media, trade and consumers. These wines were in the top ten in several categories from top vintages to top varietals.

Delicious wines from South Africa, the 2017 featured International Wine Region for this year’s Annual Oakland Wine Festival, nearly stole the show while capturing the hearts and palates of the wine savvy and novice alike.

A fine team of sommeliers and wine educators, led by Ryan Williams, CSW the Oakland Wine Festival’s Honorary and Lead Sommelier, provided guidance for participants as they tasted, voted on and discussed the wines.

All were encouraged to vote their wine palates and to responsibly taste the extensive variety, and not all 121, of the national and international wines that our invited vintners selected to share and showcase.

Votes cast by consumers, sommeliers, winemakers, trade, or media participants were also color-coded, thus identifying the classification of participant who has cast the vote.
Every wine had its own private black box which allowed votes to be cast with discretion.

Winemakers, vintners, consumers, members of the media and wine trade industry spent much time meeting and enjoying one another during the Judgment of Oakland TM double-blind tasting. In that spirit, every participant did not submit a vote for every wine tasted.

Statistics for the Judgment of Oakland TM 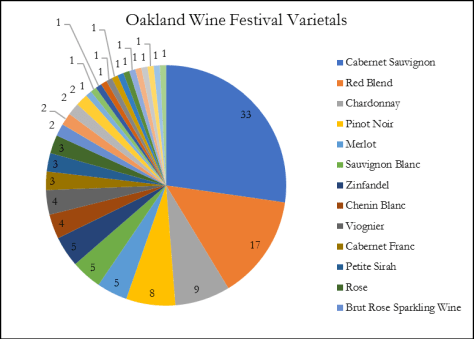 Presenting a depth of wine varietals supports the educational and charitable goals of the Oakland Wine Festival which are to provide, promote and preserve the knowledge, exposure, art and understanding of wine, wine appreciation, winemaking, viticulture, enology and food. We accomplish these objectives by sharing our industry relationships, intimate workshops, special events, and by creating unique excursions and opportunities to spend time with winemakers and chefs from around the world. Consumers and wine professionals continue to applaud the value and uniqueness of The Oakland Wine Festival and the Oakland Wine and Food Society.

All remaining wine from the 121 bottles was donated that day to a local nonprofit organization who used the wine for their fundraiser the following day. Their fundraiser, which was in jeopardy because they had no wine to serve, would not have happened without our donation. 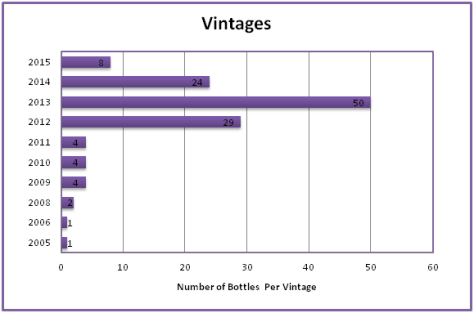 Results for the Judgment of Oakland TM

Best in Show wines are the wine that takes the top spots from of the highest ranking of the weighted votes cast by consumers and professionals.

The 2011, Quixote, Helmet of Mambrino, Petite Sirah from the Napa Valley took the top honor for the 2017 Best of Show Judgment of Oakland TM.

The Top 60 Best in Show wines (represents 50% of the total number of wines showcased) are comprised of 8 of the 10 presented vintages which speaks volumes for the wine quality and diverse winemaking styles of our wines and winemakers.

Within the top ten of our Best in Show, Cabernet Sauvignon represented 50% of the wines, Chenin Blanc held down 20%, and Pinot Noir, Petite Sirah and Zinfandel each had 10% of the top 10 wines.

To learn much more about the consumers and professionals wine rankings and choices by varietal, vintage, appellation and more, click the link below where you will find the full report:

The Oakland Wine Festival is excited to present the final results of the Judgement of Oakland TM which broke ground by inviting consumers to join with leaders in the wine world to participate in a double-blind tasting of top wines from around the world.   The Judgment of Oakland TM is the first ever double-blind tasting to include consumers, tasting side-by-side with winemakers and winery owners which is a rare experience that only select professionals have enjoyed for centuries worldwide.

The event, nestled high in the Oakland Hills, behind the closed doors of the Sequoyah Country Club, featured 129 affordable to quite expensive wines in a broad range of varietals and wine styles.

A select team of sommeliers and wine educators led the participants through the tasting and voting process.  Each wine bottle was hidden in a plush velvet bag, and accompanied by a voting box to hold the votes cast within the following five categories: consumers, sommeliers, winemakers, trade, and media.  Over 200 winemakers, vintners, winery owners, sommeliers, trade, media and an array of wine aficionados double-blind tasted and voted on the wines.

“This was a great opportunity for our consumer participants to see what it’s like to be on the inside,” said Russ Weis, President, Silverado Vineyards and Honorary Steering Committee Member.  “And this really gave our winery partners the opportunity to learn a lot more about what consumer want to see on their dinner tables.  There was a clear correlation between price and quality in the results.”

Presenting such a depth of wine varietals supports the educational and charitable goals of the Oakland Wine Festival. Consumers and wine professionals applauded the uniqueness of this event.  All were encouraged to vote their wine palates and to responsibly taste the wide variety of national and international wines during this educational and fun event.  In that spirit, every participant did not submit a vote for every wine tasted. Winemakers, vintners, consumers, members of the media and wine trade industry spent much time meeting and enjoying one another while feasting on crispy hot tater tots, savory biscuits and delicious bacon during the brunch that accompanied the Judgment of Oakland ™ double-blind tasting, which was subtitled, “Biscuits, Bacon and Bottles.” JaM Cellars and Trentadue Winery sponsored the sparkling wines for this brunch event.

Statistics for the Judgment of Oakland ™ 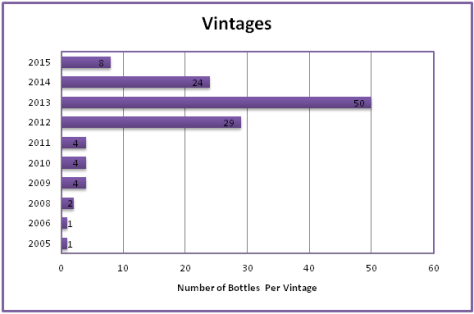 Russ Weis, President, Silverado Vineyards and Honorary Steering Committee Member states, “Wineries clearly wanted the Oakland consumer to try more Cab than Chardonnay.  With Cab Franc coming in at 5% of the entries, it matches the Sauvignon Blanc numbers.  That’s a very interesting wrinkle.  Could Cab Franc catch up to Sauvignon Blanc’s 9.6 million cases in the US market?  I doubt it, but it is interesting that wineries wanted to test the waters at the Oakland Wine Festival!”

Special Note:  To support the launch of our Exceptional Vine Initiative, The Oakland Wine Festival plans to salute our Five Years and to celebrate our new focus to bring youth and young adults into the industry. We look to hold an elegant event in 2020. Oakland Wine and Food Society Memberships help support our work and will provide you with special recognition at our 2020 event. Join Now!